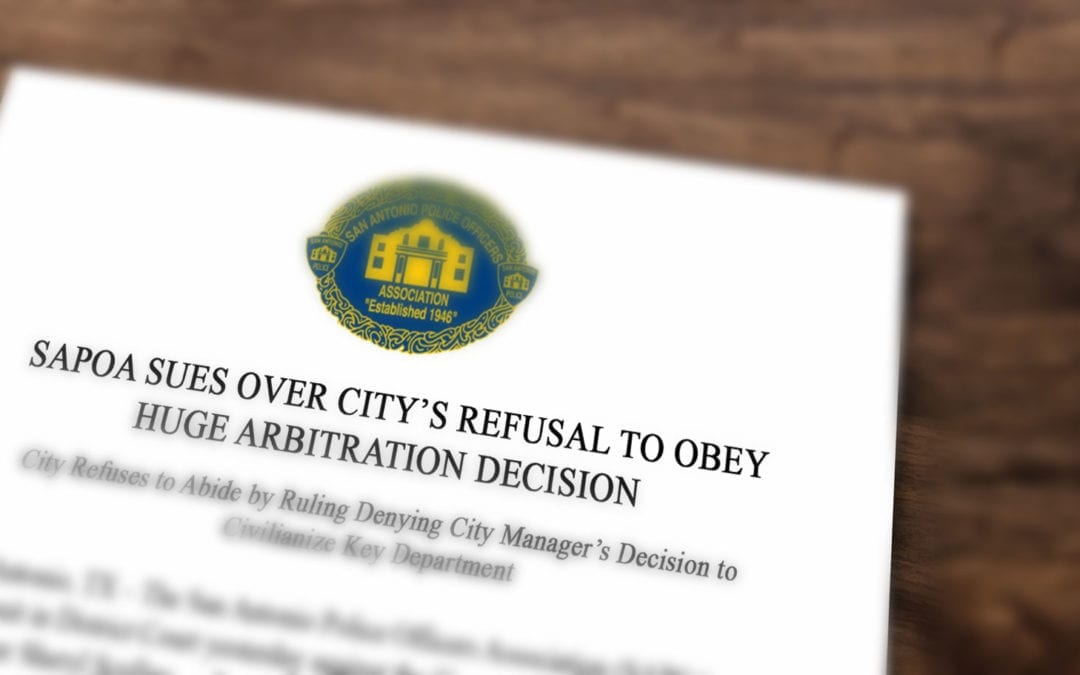 San Antonio, TX – The San Antonio Police Officers Association (SAPOA) filed a lawsuit in District Court yesterday against the City of San Antonio, City Manager Sheryl Sculley, and Police Chief William McManus. The lawsuit asks the Court to bring the City into compliance with a January 8, 2018 arbitration ruling stating that their decision to replace sworn SAPD Officers with non-sworn civilian employees in the SAPD’s Off Duty Employment Unit (the “ODEU”) violates terms of the SAPOA Collective Bargaining Agreement (the “CBA”).

“The refusal of the City Manager and the Police Chief to abide by the Arbitrator’s ruling is just another example of their contempt towards our legally binding contract,” said Mike Helle, President of the San Antonio Police Officers Association. “Sheryl Sculley said her attempt to replace officers with civilians in the Off Duty Employment Unit was necessary to annex areas of south San Antonio. Her actions show that she not only misled the public by telling them that this action would add 6 new officers to the south patrol, but that she also has little regard for our contract and the process of enforcement.”

In its 30 years of existence, the ODEU has always been staffed by Police Officers, not civilians, and Article 39 of the CBA lists nine department units that can be civilianized but does not mention the ODEU. The CBA states specifically that ODEU positions are to be filled with sworn officers. In fact, Article 14, Section 2 refers to “sworn support personnel,” and that the ODEU unit is required to be “staffed” by a sergeant and additional “sworn support personnel.”

With this lawsuit, SAPOA is simply asking the City to comply with the January 8, 2018 ruling by the Arbitrator, Richard F. Dole, Jr., who stated that our grievance was “proven” and that “the City is to correct its violation.”