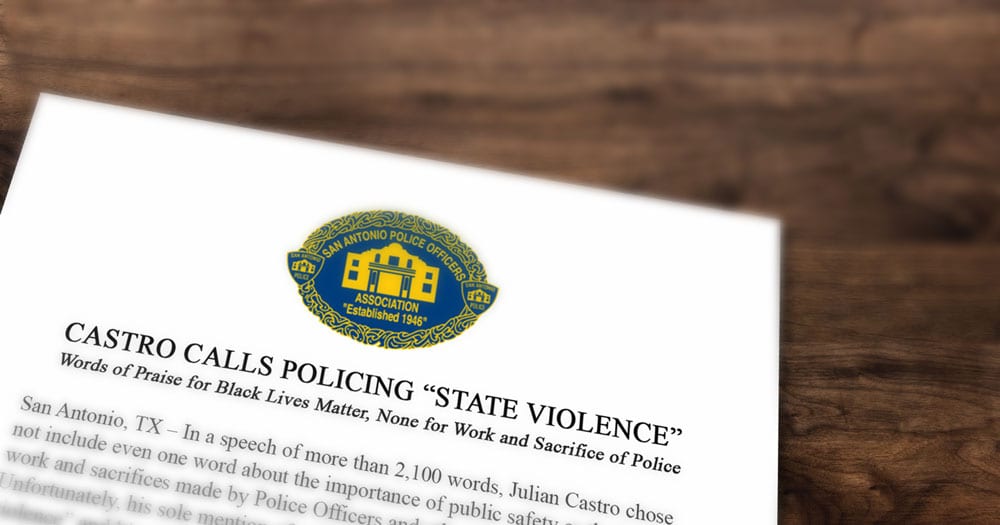 Words of Praise for Black Lives Matter, None for Work and Sacrifice of Police Officers.

San Antonio, TX – In a speech of more than 2,100 words, Julian Castro chose not to include even one word about the importance of public safety or the hard work and sacrifices made by Police Officers and other law enforcement officials. Unfortunately, his sole mention of police officers came in reference to “state violence” and his statement that “any interaction with the police can become fatal.”

“It’s too bad Julian Castro used his brief moment of national exposure to denounce police officers instead of talking about the importance of public safety or the officers who work hard every day to keep our cities safe,” said Michael Helle, President of the San Antonio Police Officers Association. “In San Antonio, we know Castro’s record well, and we’re not surprised that he had words of praise for Black Lives Matter, but couldn’t find even one nice thing to say about police officers.”

Across the country, in just the first 13 days of 2019, we have already lost 7 officers who have fallen in the line of duty. The San Antonio Police Officers Association hopes all candidates for office – whether they are running for City Council or President of the United States – can show appreciation for the many sacrifices of law enforcement.