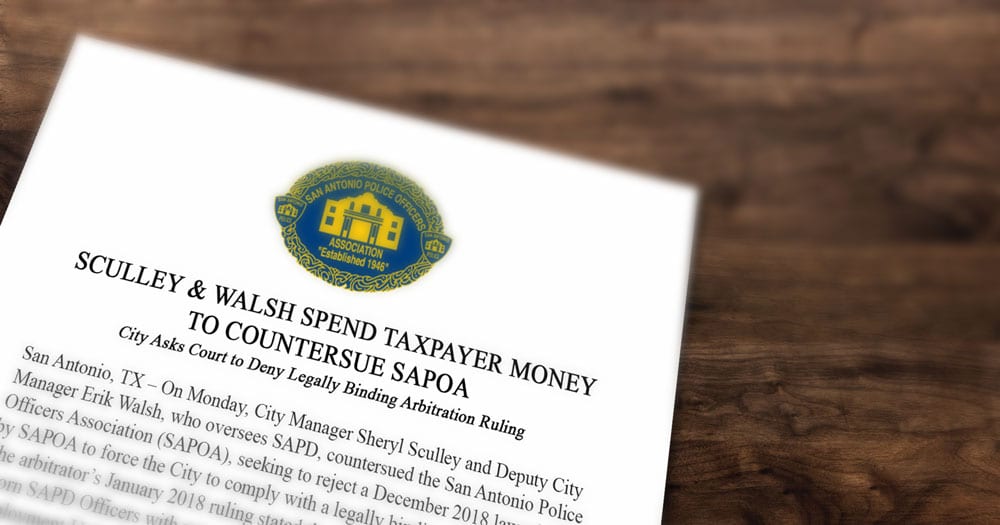 San Antonio, TX – On Monday, City Manager Sheryl Sculley and Deputy City Manager Erik Walsh, who oversees SAPD, countersued the San Antonio Police Officers Association (SAPOA), seeking to reject a December 2018 lawsuit filed by SAPOA to force the City to comply with a legally binding arbitration ruling. The arbitrator’s January 2018 ruling stated that the City’s decision to replace sworn SAPD Officers with non-sworn civilian employees in the SAPD Off Duty Employment Unit violates terms of the Collective Bargaining Agreement between the City and SAPOA. The City’s legal filing asks that the arbitrator’s award be overturned and also argues that the court in which SAPOA filed their initial lawsuit has no jurisdiction to even hear the case.

“By spending taxpayer money on another losing lawsuit, Sheryl Sculley and Erik Walsh are once again not only being reckless with our tax dollars, but continuing to demonstrate a hostile and vindictive attitude towards SAPOA and the officers we represent,” said Michael Helle, President of the San Antonio Police Officers Association. “I hope the next City Manager will show more respect for the work of our police officers and put a stop to these types of frivolous legal maneuvers.”

On December 10, 2018, The San Antonio Police Officers Association (SAPOA) filed a lawsuit against the City of San Antonio, City Manager Sheryl Sculley, and Police Chief William McManus seeking to bring the City into compliance with a January 8, 2018 arbitration ruling stating that the City’s decision to replace sworn SAPD Officers with non-sworn civilian employees in the SAPD’s Off Duty Employment Unit (the “ODEU”) violates terms of the SAPOA Collective Bargaining Agreement (the “CBA”).

In its 30 years of existence, the ODEU has always been staffed by police officers, not civilians, and Article 39 of the CBA lists nine department units that can be civilianized but does not mention the ODEU. The CBA states specifically that ODEU positions are to be filled with sworn officers. In fact, Article 14, Section 2 refers to “sworn support personnel,” and that the ODEU unit is required to be “staffed” by a sergeant and additional “sworn support personnel.” Arbitrator Richard F. Dole, Jr. said SAPOA’s grievance was “proven” and that the City had to “correct its violation.”