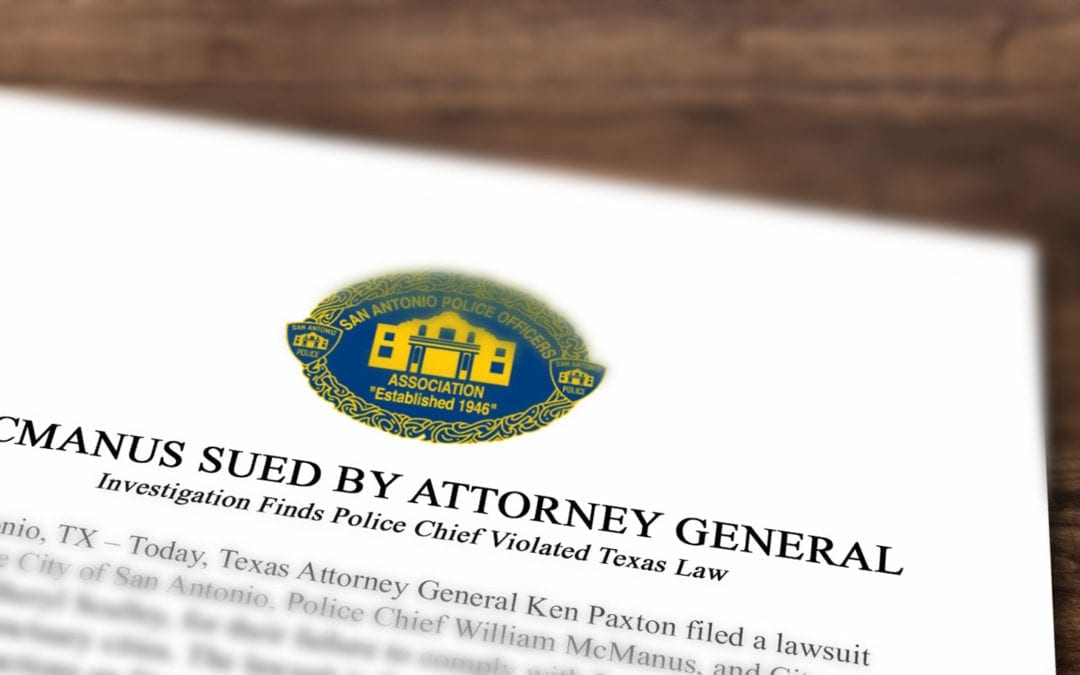 San Antonio, TX – Today, Texas Attorney General Ken Paxton filed a lawsuit against the City of San Antonio, Police Chief William McManus, and City Manager Sheryl Sculley, for their failure to comply with Senate Bill 4, which prohibits sanctuary cities. The lawsuit is the result of a lengthy investigation into the Chief’s actions on December 23, 2017, when police were called to the scene of an apparent human smuggling operation. A dozen suspected illegal aliens were found in the back of a tractor-trailer and when Chief McManus appeared on scene, he refused to cooperate with federal immigration authorities and subsequently ordered the 12 suspected illegal aliens released from custody, in violation of Senate Bill 4.

“The decision by the AG to sue Chief McManus and City Manager Sculley totally vindicates the position our organization took earlier this year when we called out the Chief for his brazen disregard of Texas law,” said Mike Helle, President of the San Antonio Police Officers Association. “We said at the time, that the Chief’s action’s violated state law and that he may have very well put lives in danger by releasing unknown illegal aliens into our city.”

In light of this lawsuit, which names Chief McManus as the first defendant, and which asks the court to issue an injunction requiring the City to comply with SB 4, prohibit SAPD from thwarting federal immigration enforcement, and assess civil penalties against the City, SAPD, and Chief McManus, the San Antonio Police Officers Association does hereby call on the Mayor and City Council to:

Form more information on the lawsuit and background on the incident, go to: SvM Original Petition_FINAL.pdf