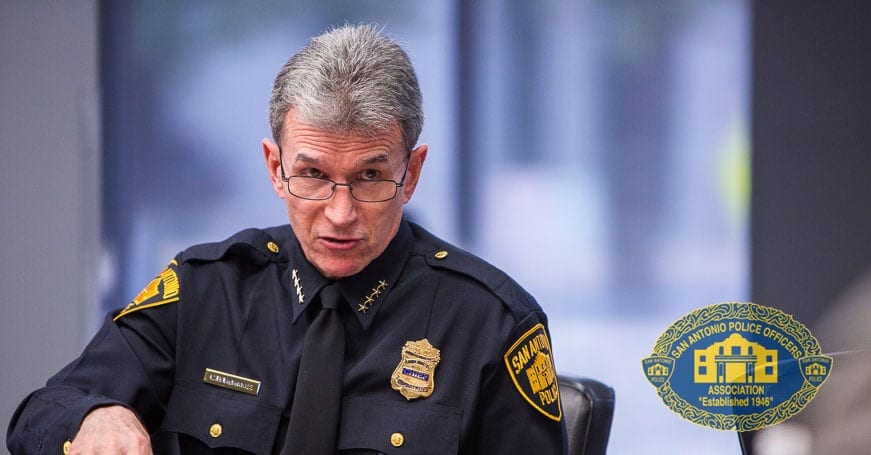 He’s under investigation and still working –
Any other Officer would be on leave or reassigned.

(San Antonio, TX, June 4, 2018) – SAPD General Manual, Procedure 908 – Mandatory Reassignment establishes a process for the “temporary leave or reassignment” of an officer who is “charged with a criminal offense or is under criminal investigation based on an allegation.” As confirmed in a letter from the Texas Attorney General’s Office dated May 25, 2018, Police Chief William McManus is currently under investigation for possible violation of state immigration law (SB 4).

On December 12, 2017, Chief McManus released 12 undocumented immigrants who had been apprehended in a case of human trafficking or human smuggling without proper investigation, a possible violation of the state’s “Sanctuary Cities Ban.” For this reason, the Attorney General’s Office launched an investigation and ordered that relevant City Departments and Officials “preserve” all documentation related to the incident. That investigation is ongoing, yet neither Mayor Nirenberg nor City Manager Sculley has asked that the Chief be placed on temporary leave or reassigned as per SAPD policy.

“By not adhering to official policy, the Chief’s telling both his fellow officers and the community, ‘do as I say, not as I do.’ He’s saying the rules don’t apply to him – that there’s one standard for people like him and another for the rest of us,” said Mike Helle, president of the San Antonio Police Officer’s Association. “This is a terrible message to send to officers under his command, but it’s also a particularly bad one to send during a time when people in minority communities sometimes feel that they are treated by a different standard. As police officers work to build bonds of trust with those in minority communities, the Chief’s actions undermine our efforts.”

Nobody is above the law, and the San Antonio Police Officers Association is calling on Mayor Nirenberg and City Manager Sculley to follow the law, not politics, and demand that Chief McManus be placed on temporary leave or be reassigned as per SAPD policy. This is about the credibility of the SAPD, but it’s also about the credibility of Mayor Nirenberg, who in a March 28, 2018 memo to the City’s Charter Review Commission stated: “I have stated many times that the City of San Antonio should be the ‘gold standard’ of ethics in governance…” If Mayor Nirenberg truly believes that then we shouldn’t have one standard for political elites and another for the rest of us. When it comes to the law, the Police Chief should be treated no differently than the “cop on the beat.”