Stay Up To Date

Get the latest news from the San Antonio Police Officers Association 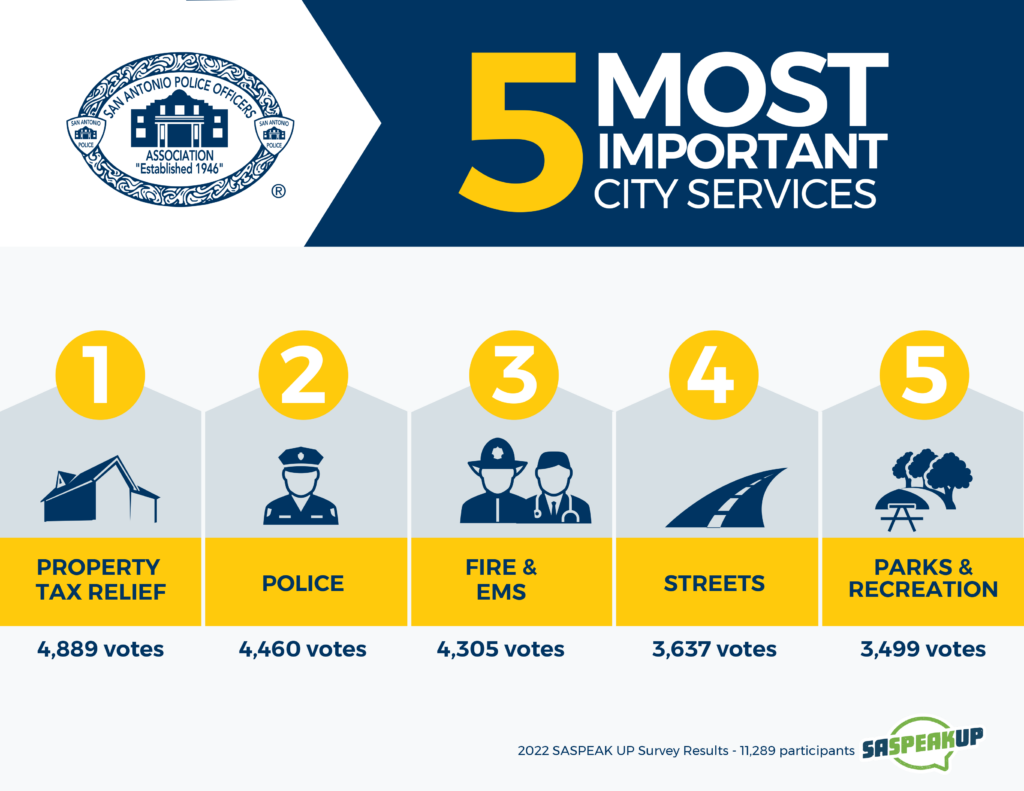 SAN ANTONIO, TEXAS – AUG. 15. 2022 – Based on the City of San Antonio’s annual fiscal year 2023 trial budget survey, San Antonians have ranked police funding as one of their top priorities for city services. A total of 11,289 completed surveys were received; the results and a proposed budget were presented by City Manager, Erik Walsh, during a City Council “A” session on Thursday, August 11.

The 8th annual ‘SASpeakUp’ online survey was available in English and Spanish. The survey was open to the public June 4 through July 8, 2022. To learn more about the City of San Antonio’s ‘SASpeakUp’ survey please visit https://www.saspeakup.com/I0508

“Effective policing is crucial to creating a safer community for our residents,” said Danny Diaz, President of the San Antonio Police Officers’ Association. “In 2022, Bexar County witnessed an 133% increase in aggravated assaults and a 17% increase in sexual assaults by juveniles. To help offset the rising juvenile crime rate, our Association is advocating for funding to support the San Antonio Public Safety Corps (PSC). This funding will be distributed evenly among the six San Antonio PSC Units operating at each of the SAPD substations. PSC is devoted to teaching local youth values, morals, community service, and leadership skills. We hope the survey’s findings encourage the City of San Antonio to provide these necessary funds.”

The City of San Antonio’s top five priorities include Property Tax Relief, Police, Fire and EMS, Streets, and Parks and Recreation. Based on several district respondents, the importance of police services is evident across the City:

Since 1946, the San Antonio Police Officers’ Association (SAPOA) has had a singular focus: to represent, preserve, and protect the benefits earned through dedicated service through the community. SAPOA works to strengthen the connections between our officers and community. The Association’s leadership consists of uniformed officers elected by the membership and entrusted with carrying forward the message of service and integrity to the City of San Antonio. To learn more about SAPOA, please visit www.sapoa.org

Stay Up To Date

Get the latest news from the San Antonio Police Officers Association